BARCELONA — The three pro-independence parties in Catalonia won the majority of seats in a parliamentary election in the region Thursday, setting the stage for another showdown with the central government in Madrid.

With a record-breaking turnout of more than 80 percent, Catalans dealt Spain’s prime minister, Mariano Rajoy, a major setback as the secessionist leaders stood poised to return to power in Barcelona, among them former regional president Carles Puigdemont, now in exile in Brussels. Washington Post 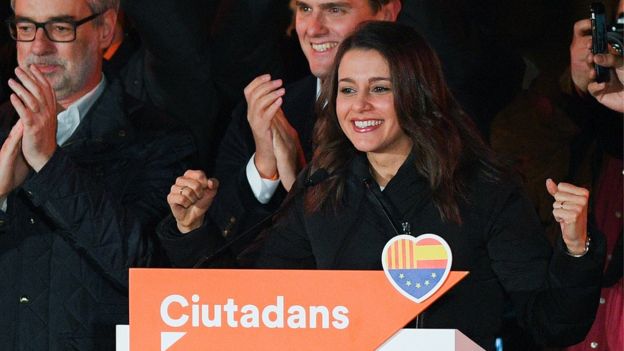 What were the results?

With nearly all votes counted, the pro-independence parties Together for Catalonia (JxCat), Republican Left of Catalonia (ERC) and Popular Unity (CUP) were on course to win a total of 70 seats in total, giving them a majority in the new parliament.

Its leader Inés Arrimadas told the BBC her party had been “victorious”. She said forming a coalition would be “difficult – but we will try”.

The PP, meanwhile, won only three seats, down from 11 in the previous assembly.

Turnout was more than 80%, a record for a Catalan regional election

Why did the election take place?

Separatists who dominated the previous Catalan parliament declared independence on 27 October after a referendum that was declared illegal by Spain.

In an attempt to stop that referendum, Spanish police stormed some polling stations. However many voters defied the Spanish courts and riot police to cast their ballots.

The move led to violent clashes with hundreds of people reported injured.

According to referendum organizers, 90% of voters were in favor of independence, but fewer than half the region’s electorate took part.

However, Mr. Puigdemont decided it was enough to declare independence from Spain.

Prosecutors accused 13 Catalan separatist politicians of rebellion and sedition, including Mr. Puigdemont and four others who fled to Belgium.

Among the accused, two pro-independence politicians are in Spanish prisons, and six are being monitored while on bail.

2 thoughts on “Separatist parties won a slim majority in the Catalan parliament: Barcelona”