In his first tweet of 2018, Trump said the U.S. “has foolishly given Pakistan more than 33 billion dollars in aid over the last 15 years, and they have given us nothing but lies & deceit, thinking of our leaders as fools. They give safe haven to the terrorists we hunt in Afghanistan, with little help. No more!”

The cutoff is not permanent, Nauert said, and only affects military assistance. Civilian assistance is not affected. 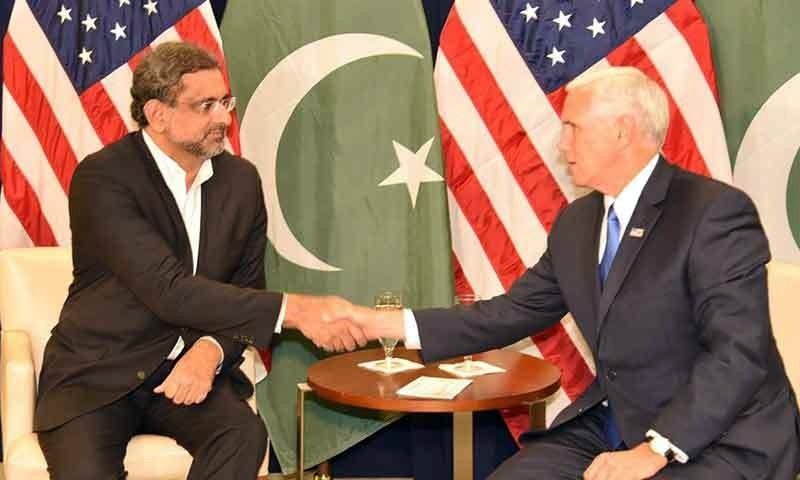 We can do it in a better way in our own way without aid. Keep your aid with you. We have lost much more than what you have given us in past 3 decades and every life matters

The U.S. State Department announced the decision, saying it reflected the Trump administration’s frustration that Pakistan has not done more against the two groups that Washington says use sanctuaries in Pakistan to launch attacks in neighboring Afghanistan that have killed U.S., Afghan, and other forces.

The department declined to say exactly how much aid would be suspended, saying the numbers were still being calculated and included funding from both the State and Defense departments.

The United States on Thursday said it was suspending all security assistance to Pakistan until Islamabad “takes decisive action against groups, including the Afghan Taliban and the Haqqani Network.”

The announcements from the State and Defence Departments followed a public condemnation of Pakistan by President Donald Trump on January 1 for sheltering terrorists.

Nauert told reporters that the suspension will remain in effect until Pakistan “takes decisive action” against groups, such as the Taliban, that is “destabilizing the region and targeting U.S. personnel.” Although Pakistan “certainly has been helpful in some instances,” she said, “they are not taking steps they need to take to fight terrorists.”

The aid suspension will include equipment and the transfer of security-related funds, with possible exceptions for U.S. national security reasons.

Nauert was not immediately able to provide a total dollar amount for the cutoff. “We are still working through the numbers,” she said.

Ahead of Nauert’s remarks, military spokesman Maj. Gen. Asif Ghafoor told a Pakistani news channel on Wednesday that Pakistan would continue to cooperate with the U.S. but would not “compromise on national interests and prestige.”

There have been hints of a Pakistan aid cut by the Trump administration for months.

Back in August, when announcing his new policy on Afghanistan and South Asia, the president said: “We have been paying Pakistan billions and billions of dollars at the same time they are housing the very terrorists that we are fighting. But that will have to change, and that will change immediately.” He vowed to “no longer be silent about Pakistan’s safe havens for terrorist organizations, the Taliban, and other groups that pose a threat to the region and beyond.”

Later that month, the administration notified Pakistan that it was delaying a payment of $255 million in military aid, pending progress against Haqqani network militants who the U.S. says are based in Pakistan and aid the Taliban.

The military aid, known as foreign military financing, “promotes the development of Pakistan’s long-term [counter-insurgency/counter-terrorism] capabilities and improves Pakistan’s ability to participate in maritime security operations and counter-maritime piracy,” according to the State Department.

The U.S. Ambassador to the United Nations Nikki Haley told reporters Tuesday that the U.S. would withhold the $255 million payment, saying, “Pakistan has played a double game for years.” That $255 million is included in the suspended aid announced Thursday by Nauert.

This is not the first time the U.S. has cut assistance to Pakistan. In the 1990s, Washington imposed aid-cutting sanctions related to Pakistan’s nuclear program and a military coup that deposed an elected prime minister.

2 thoughts on “Not looking for financial aid anymore. COAS told US Ambassador”