Arsenal, who also drew both Premier League encounters with Chelsea this season, suffered one of the most chastening defeats of Arsene Wenger’s reign on Sunday as second-tier Nottingham Forest won 4-2 in the FA Cup third round.

While Arsenal was well below their best once again, in contrast to their surrender in Nottingham, the Frenchman will be encouraged that they showed enough spirit to keep Chelsea at bay. “I felt there was great togetherness. I am pleased with the spirit and determination,” Wenger said.

“You want first to be solid, but ideally you want to score as well.”

And that’s that. No goals, no near misses, no VAR controversy. You couldn’t put a cigarette paper between these two teams. So it’s off to the Emirates in a fortnight for another 90 minutes, followed by extra time and penalty kicks. 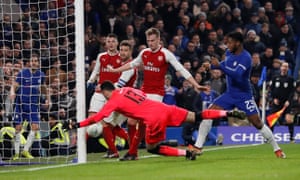 Referee Martin Atkinson consulted the VAR on two Chelsea penalty claims when Victor Moses tangled with Ainsley Maitland-Niles in the first half and for Danny Welbeck’s last-minute challenge on Cesc Fabregas, but he was satisfied enough with the evidence relayed to him not to award a spot-kick.

“I am very positive about VAR because when there is a big doubt during the game it is right the referee and the other referee watch the video to check and make the best decision,” Conte said.

“I think everyone wants fewer mistakes during the game and I think this could be very positive for sure.” Source: Bbc

Wenger surprisingly left Alexis Sanchez on the bench amid talk of unsettled Chile forward joining Manchester City, while Mesut Ozil missed out with a knee injury.

Wenger was watching from the press box as he serves his touchline ban and the Gunners boss was shifting anxiously in his seat early on when Hazard’s pass gave Alvaro Morata an opportunity that he drove into the side-netting.

After a tepid opening from Arsenal, Alexandre Lacazette escaped the Chelsea defense to collect Jack Wilshere’s pass, but the French striker wasted the chance as he scuffed a hurried shot wide.

Chelsea wing-back Victor Moses forced David Ospina into action with a stinging drive that the Arsenal goalkeeper fumbled before recovering to snatch the ball away from Morata.

Chelsea wasted a chance to take control of their League Cup semi-final against Arsenal as the misfiring Blues were forced to settle for a 0-0 draw in Wednesday’s first leg.

Antonio Conte’s side dominated possession for long periods at Stamford Bridge where the Video Assistant Referee system (VAR) was in operation – but lacked the killer instinct required to take a step towards the final.

They had 21 shots to just eight from Arsenal, yet the tie remains on a knife-edge heading into the second leg at the Emirates Stadium on January 24. “We are not so clinical despite creating chances. If you want to win you have to score,” Conte said.

“We didn’t concede a goal, but we know we play away at Arsenal and we must be ready to fight if we are to play the final.”

Arsene Wenger later denied that was the case while confirming that Jack Wilshere, his captain for the night, had suffered yet another injury to add to Arsenal’s worrying roll call of absentees. However the midfielder’s apparent ankle sprain received in blocking a shot, should not keep him out too long. It is hoped.

One thought on “Arsenal madden as semi-final ends in 0-0 tie with Chelsea: English League Cup”