Where May leaving no stone unturned in bringing EU members and own MP’s together on the same page, Parliament is inching toward a plan to delay Brexit as a way of preventing a chaotic no-deal departure. The pound rose. Opposition leader party John trying best to drag the UK exit from EU on 29th March in case May efforts turned no fruit out. From all major stakeholders, it’s a possible way out but temporary as it will give some extra time to May to keep hopes alive or face worst circumstances.

The pound broke back through the $1.30 level amid continued market optimism that Parliament moves are reducing the risk of a no-deal Brexit. The currency also got some traction on the overnight report that Labour is likely to support the Cooper-Boles plan to delay Brexit, according to Jeremy Stretch, head of Group-of-10 currency strategy at Canadian Imperial Bank of Commerce. 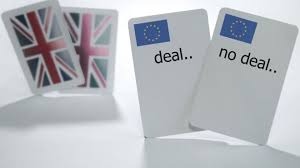 With momentum in Parliament swinging toward delaying Brexit, anti-EU Conservatives are fighting back. They’ve proposed an amendment today that seeks to limit the amount of parliamentary time given to non-government business — the immediate impact would be to kill off the cross-party effort led by Yvette Cooper and Nick Boles to force a Brexit delay if there isn’t a deal.

But the latest amendment will struggle to pass even if the government backs it. Boles and the nearly 20 other Tories who support him aren’t going to vote for it. It will, though, provide an interesting preview of next week’s arithmetic.

On Twitter, Boles said his plan would be modified to “override” the Brexiters’ amendment even if it did pass.

Trade Secretary Liam Fox told Bloomberg Television in Davos he’s not against an extension of Article 50 in all circumstances. “A delay because we’ve got a deal and want to implement it, that would be one thing,” he said in an interview when asked about Parliament moves to delay Brexit.

It’s worth pointing out there are seven Brexit-related bills currently making their way through Parliament, according to Prime Minister Theresa May’s office, and time is getting tight to pass them all. So a kind of last-minute, short extension to Article 50 might well be needed — even if she does get her deal through Parliament.

The pound edged higher on Wednesday on growing expectations that a no-deal Brexit would be ruled out. And options also indicate investors expect a delay to exit day.

The idea of a smooth no-deal Brexit is nothing more than “fantasy economics” and no amount of trade agreements with other countries can compensate for lost trade with the European Union, Confederation of British Industry Director-General Carolyn Fairbairn has warned

Speaking to Bloomberg Television’s Francine Lacqua in Davos, Fairbairn also said the vast majority of firms are not prepared for Britain to leave the EU without a trading agreement in place.

“We are talking to thousands of smaller businesses who say to us, actually we can’t we can’t be ready,” she said. “There is just so much uncertainty, our supply chains are so complex, and they are saying Brexit simply cannot be managed. That is our big concern.”

In Dublin, nerves are beginning to jangle.

At first glance, the European Commission’s comment Tuesday that a no-deal Brexit would mean a return of a hard border in Ireland is a statement of the obvious. Some, however, interpret the Commission’s intervention as an effort to focus minds in Dublin on the consequences of no deal — and a harbinger of pressure to come to soften the backstop.

Agriculture Minister Michael Creed sought to calm those concerns, telling broadcaster RTE that Brussels stands united behind the withdrawal agreement, and tried to turn the focus back to London, saying the best way to avoid the issue is by Westminster backing the deal.

U.K. Trade Secretary Liam Fox is at the World Economic Forum in Davos, where he’s telling everyone he meets that a no-deal Brexit is “a real possibility” and that they should get ready.

Parliamentary moves to delay the U.K.’s departure from the EU if there’s no deal were backed by people who wanted to “delay Brexit indefinitely,” he said. Fox said the solution to the Brexit impasse was in changes to the Irish backstop, and that Prime Minister Prime Minister Theresa May was focusing her efforts on doing that.

“I believe that we can overcome the current difficulties when we discuss that issue together,” the EU’s Brexit negotiator, Michel Barnier, said in an interview with the Luxembourg Times. A more ambitious future relationship could help make the Irish backstop — the key stumbling block in the U.K. Parliament — “less prominent,” he said.

Barnier said his impression is that the backstop “is not the central issue,” and that the key debate in the U.K. is over what the country’s future should look like. British politicians need to find a “positive majority for something,” he said.

Former Chancellor of the Exchequer George Osborne has told the World Economic Forum in Davos “delay looks like the most likely option” in the Brexit process. “It gives some space.”

Neil Basu, Assistant Commissioner of London’s Metropolitan Police, told the BBC that a no-deal Brexit “would not be good for security.”