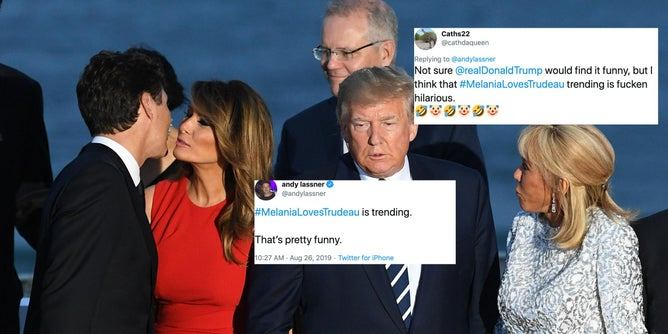 US first lady and Canadian PM Stood next to one another and shared a greeting kiss during a group photo at the G7 summit and it wasn’t long before it was turned into a meme.
People around the world reacted to this opportunity the way Canadian PM and US first lady greeted each other in the G7 event. A great moment for the world leaders to interact with each other and to exchange bilateral issues and opportunities among there territories. That’s what the summit prime purpose is said to be. It is one of the few moments when they get a chance to interact with each other in person. That chance availed in the best possible way when the US first lady never let the chance off and greeted Canadian PM with as much possible stretch as possible and shared a smile with a kiss on the cheek. What a great moment and pleasure to meet you, Melania.
The G7 summit concluded on August 26, 2019, at Biarritz, Nouvelle-Aquitaine, France. No joint communique was issued at the end of the summit but host country President Emmanuel Macron released a statement saying that the seven industrialized nations were committed to open and fair world trade and global economic stability. US President Donald Trump closed this year’s G7 summit with a press conference that touched upon issues include trade, Iran, climate change and Russia.
The US first lady and the Canadian prime minister took the opportunity to say hello to one another at the event in the south of France, where world leaders were meeting to discuss global issues.
The pair greeted each other with a kiss on the cheek and spent a few minutes talking.
Justin Trudeau is beloved by many, and people online couldn’t help but turn their interaction into a hilarious meme, which turned out to be rather awkward
1. G7 might consider reinstating Russia
2. Trump open to talks with Iran
3. Trump opens doors to a possible trade deal with China
4. Trump skips session on ‘climate and biodiversity’
5. India- Pakistan tensions expected to lighten
6.  G7 leaders support Hong Kong’s autonomy
7. US-UK trade deal
8. US-Japan trade agreement