Get the Live updates about New PM

What you need to know:

– The Queen appointed him during a ceremony at Buckingham Palace

Refresh the page for live updates. All updates in Coordinated Universal Time (UTC/GMT)

14:40 Johnson has become UK’s new prime minister after the Queen invited him to form a government in her name. The new premier will now head to Downing Street and make a speech.

14: 25 Johnson’s motorcade to Buckingham Palace was blocked by a small group of protesters. The protesters were manhandled out of the way by police. Greenpeace UK says its volunteers interrupted Johnson’s convoy to the Palace.

Breaking: Boris Johnson’s journey to Buckingham Palace interrupted by our volunteers with a #ClimateEmergency message.

Breaking: Boris Johnston’s motorcade bought to a stop by @GreenpeaceUK protesters on the way to Buckingham Palace to be sworn in as PM @BBCNews #BorisJohnsonPM 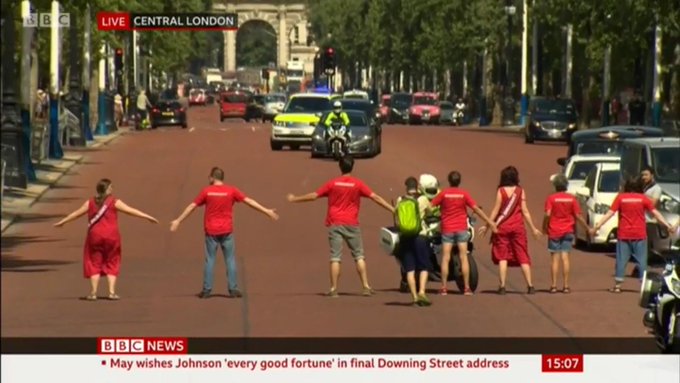 14:20 According to The Royal Family, May’s audience with the Queen lasted around half an hour.

This afternoon, in an Audience with The Queen, The Right Honourable Theresa May MP tendered her resignation as Prime Minister and First Lord of the Treasury. Her Majesty was graciously pleased to accept. https://bit.ly/32KE817 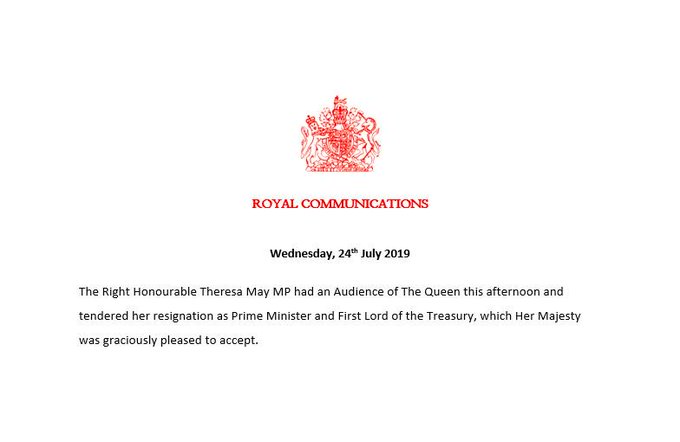 848 people are talking about this

14:10 May has officially stepped down as prime minister. The Queen has graciously accepted her resignation. As May departs, incoming PM Johnson arrives at Buckingham Palace. The Queen will invite Johnson to form a government.

Congratulations @BorisJohnson on becoming our Prime Minister. It is a great privilege & responsibility – but behind that famous black door you will find the most hugely talented officials waiting & wanting to help you serve the country; I wish you well.

1,049 people are talking about this

13:51 May has now arrived at Buckingham Palace, where she’s meeting with Queen Elizabeth II. May will formally tender her resignation to the Queen.

13:31 May delivered a short resignation speech alongside her husband, in which she thanked her colleagues, public servants, staff, the British people and her husband. She gave special mention, as during her final appearance in parliament, to the importance of women in power. “This is a country of aspiration and opportunity and I hope that every young girl who has seen a woman prime minister now knows for sure there are no limits to what they can achieve.” She repeated her intention to stay on as a backbencher and said she would continue to serve in the national interest.

On Brexit, she said Johnson’s first task would be ensuring a departure from the EU that works for the whole country.

13:26 May has emerged from Downing Street, having presumably thanked her staff, to deliver her street-side speech.

I wrote to @BorisJohnson yesterday to congratulate him on his election, to wish him well & to say I’ve decided that after 20 yrs on the front bench it’s the right moment to move on. I shall leave the govt when @theresa_may offers her resignation to The Queen.

402 people are talking about this

13:08 The Evening Standard is reporting on the text of Johnson’s planned speech later today. He will reportedly vow “to serve the people,” break the Brexit impasse and deliver firm action, the paper reports.

“The time has come to act,” he was due to say, according to the report. “To take decisions, to give strong leadership and to change this country for the better.”

12:34 British Finance Minister Philip Hammond says he has resigned from the government. He had long signaled he would resign should Johnson take power.

I have just handed in my resignation to @theresa_may. It has been a privilege to serve as her Chancellor of the Exchequer for the last three years. 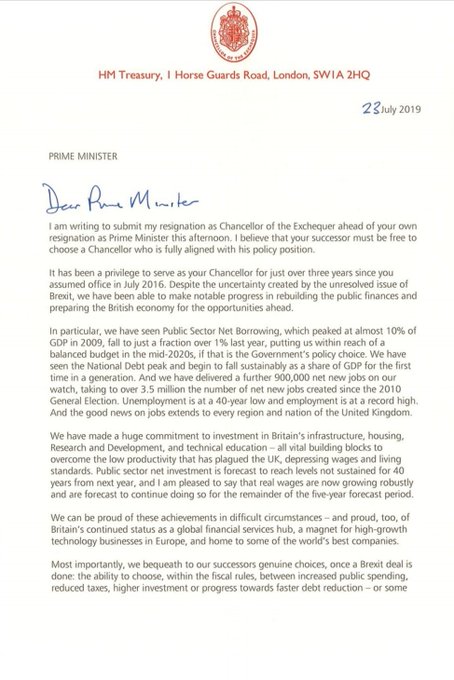 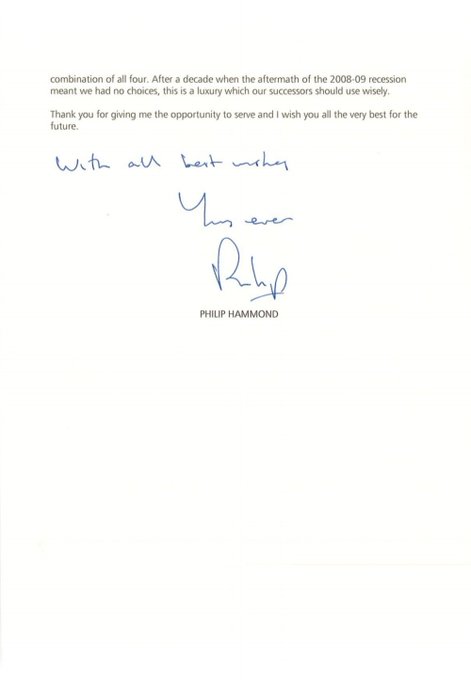 2,702 people are talking about this

12:22 May’s convoy leaves parliament, on her way to Downing Street.

12:17 It was confirmed by other Conservative MPs that Johnson was not in attendance to May’s final appearance as PM.